When you’re driving rideshare as a full-time job, tips can be the difference between success and failure. Lyft has always included tipping as an in-app feature and Uber passengers have been able to tip through the app since 2017, but the rideshare industry was founded on a model that did not encourage tipping.  Especially in an increasingly cashless world. The phrase “I’ll tip you in the app” has become the bane of many Uber drivers’ existence, as many drivers say that it seldom comes true.

According to a field study by the National Bureau of Economic Research, only 16% of all trips are tipped and nearly 60% of people never tip, while only 1% of people always tip. So, let’s look at 6 ways of getting your tip average up near 25% in a world where most riders will never tip.

Passengers should be able to expect a safe ride. Sharp turns, rapid accelerations, and abrupt stops send exactly the wrong message if your goals include larger and more frequent tips. Checking your mirrors frequently and consistently using your turn signal sends the message that your passenger’s safety is of utmost importance.

Clean means clean. Windows should be free of streaks. Floor mats and seats should be vacuumed frequently.  Periodically check the back seats and floor for anything left behind. A stray gum wrapper left by the last ride may cancel a tip from the next one. Nothing, however, puts a damper on tipping like a stinky car. Air fresheners are useful, but look for ones that provide a neutral clean car smell. Fragrances that are too strong can trigger headaches or even an allergic reaction. The less they have to think about the smell of your car, the more likely they are to tip. Clean also applies to the driver’s appearance, attire, and odor. Be pleasant and smile. Body odor is a no-no, but again, avoid strong perfumes and colognes. Dress as nicely as you can, without sacrificing your comfort. Think of business or business casual dress code.  Don’t expect to get tipped if you come to work dressed for laying on the sofa.

If there is music playing, it should be of a kind and at a volume that reflects your customer’s taste, not yours. Talk radio can be provocative, and certain types of music might offend some of your passengers. You might opt for local news and weather for the morning commute and move towards neutral, quiet music and/or silence as the day wears on.  Asking your passenger what they prefer is never a bad idea.

The Play Octopus Tablet lets passengers play games, reminds them to tip and to rate you and is a great conversation starter. The tablet is free (it shows an ad occasionally) and the company pays you $100+/month to have it in your car.  Learn More>> Your conversation with a passenger during a ride can maximize what you earn from that ride. As the passenger enters the car, most seasoned drivers have a lead question they use to test the suitability of conversation. Their response to “How’s your day going?” will usually let you know whether or not your passenger wants to talk. . You’re trying to make a positive, pro-passenger connection. Listen more than you talk. Providing helpful dining or entertainment advice for out-of-town visitors is consistently rewarding.  Some passengers desire silence; being able to recognize and honor this preference is also important to your overall success. After a long day at work, some people just want to quietly enjoy a safe ride and use their phone.

Your passengers will feel obligated to reciprocate your generosity. Stocking your car with bottled water, snacks, and tissues is a good investment, as is having phone chargers on hand for all major models. Helping passengers with luggage or bags is a must. It’s also nice to have signs that remind your customers to rate you, because this can also remind them that their ride was worth a tip.

PowaPod is a convenient and clutter free way to provide your passengers with chargers for both Android and Apple devices. Learn More>> Make the inside of your vehicle a cozy haven for your passenger and build a positive connection. The difference between getting and not getting tipped may be as simple as asking if the air conditioning, heat, or windows are to your passenger’s liking. Some drivers will enhance their cars with blinking interior lights or some other gimmick, but those over-the-top enhancements really aren’t necessary.  By mastering these six basic tactics, you’re sure to increase the rate and size of your tips.

We may receive a referral fee for recommending some of the products, apps or services listed on this website.  This article is for informational purposes only. 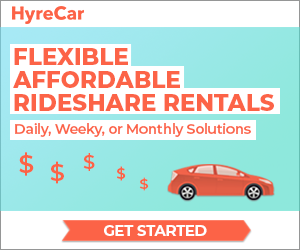