Gas prices are on the rise and have been so throughout the year so far. According to AAA, the average gas price in the United States is at $3.17 (as of July 31). This is up almost 41% year to date and 45% from one year ago. The questions many Americans want to know is ‘what is the reason for this?’ and ‘will this continue into the future?’. We will cover several key reasons why gas prices have increased and one myth. Then we will finish with some projections into the future on if this is expected to continue or not. But first, we need to understand what are the forces that drive prices to change.

As is the case for any asset, the price of it depends on supply and demand. Whether it be in the stock market, the housing market, or yes, even gas. So, to analyze the increase in gas prices, we need to look at the two most basic laws of economics: the law of demand and the law of supply. This can be shown most easily by a supply and demand graph. Price is on the vertical line, and Quantity is on the horizontal line. The Supply curve slopes upward, and the Demand curve is downward sloping. 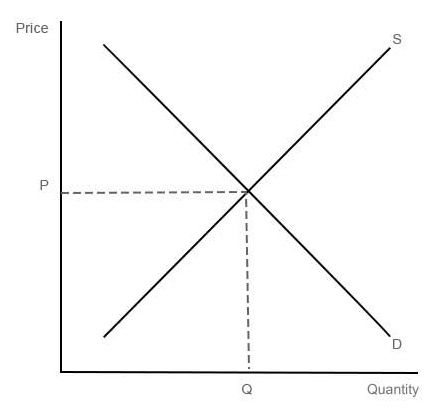 Why the Price of Gas is on the Rise

The first reason can be attributed to seasonal demand. Look at this chart produced by the US Energy Information Administration. This chart shows the average gas prices in each month from 2008 through 2019. I have highlighted the summer months (June, July, and August) yellow.

But then this leads us to the following question: why are the summer months typically at the peak for the year? The season that most people travel is in the summer. School is out. The weather is warm. It is right at the midpoint of the year, so many people are ready for a vacation if they haven’t had one since the holidays. People are therefore driving their cars more in the summer. This leads to an increase in the demand for gas.

And what happens to a product when the demand for it goes up? Its price increases. Since the average increase for the past decade has been right at 16%, that probably doesn’t explain the whole 40% increase we are seeing in 2021.

The second reason is due to the recovery from Covid-19. With the Covid-19 restrictions being lifted throughout the country, people have even more reason to travel. Many people rescheduled their vacations in 2020 and now have waited until 2021 to take that much needed vacation. As we discussed in the last section, the more people who travel for vacation, the more gas is used and therefore the higher the price for gas.

The price of gas is also tied to recoveries in the economy. There was a two-and-a-half-year increase in the price of gas from December 2008 until May 2011, as can be seen from the graph above. This is exactly when the economy and stock market started to recover from the bursting of the US housing bubble. If we look at the past few years of history for gas prices, we see the same thing. As fears of Covid-19 begin in early 2020, the price of gas starts to decline and starts picking back up around May. We saw this in the stock market as well with prices bottoming out in March and increasing in April.

These two issues have covered the demand for gas. People are now demanding more gas than usual because they are travelling more due to it being the summer and due to the recovery from Covid-19.

The third and final reason that gas prices are on the rise is because OPEC decided to limit the production of oil (note that the prices of oil and gas are heavily correlated with one another so that when oil changes, gas is expected to move in the same direction). OPEC, or the Organization of the Petroleum Exporting Countries, is a cartel consisting of 13 main countries that export oil. (Algeria, Angola, Equatorial Guinea, Gabon, Iran, Iraq, Kuwait, Libya, Nigeria, Republic of the Congo, Saudi Arabia, United Arab Emirates, Venezuela)

OPEC came to an agreement in January to limit the supply of oil to the rest of the world. The OPEC countries did this as a way to be cautious surrounding the recovery of the global economy. At the time, OPEC wasn’t sure if the economy was going to recover, so to cover themselves, they decided to limit the amount of oil that can be sold. This reduces their risk, but also allows them to charge a higher price per barrel of oil. If the economy doesn’t recover, then the oil is not oversold.

But if the economy does end up recovering, they have the option to then increase the supply of oil. So, since OPEC reduced the supply of oil, the law of supply states that the price of it will increase. And since oil and gas are highly correlated, as oil prices rise, gas prices will rise as well. And that is exactly what we have seen since the OPEC announcement from January. It wasn’t until July that OPEC decided to end the limit of oil production.

Did the Cancellation of the Keystone Pipeline XL Expansion Increase Gas Prices?

One myth on why prices have risen is due to the cancelling of the Keystone XL Pipeline by President Biden in January 2021. According to Tom Tunstall of the UTSA Institute for Economic Development, the rising price of gas in not dependent on this decision. He said that it is more so dependent on other nations limiting their supply of oil, as we discussed in the previous section.

Jamie Court, president of the non-partisan group Consumer Watchdog, speculated that this decision could actually lower the price of gas. So if anything, there is very little evidence that shows that the cancellation of the Keystone Pipeline was a reason for the rise in prices.

“(Canceling construction) gives more security to the Midwest refiners knowing that the portion of the pipeline that’s being used now to bring crude into the Midwest refineries can be used in the future,” Court said, explaining how the confidence could lower gas prices in the short term.

“America wins,” Court added. “If you’re a worker, if you’re a driver and you want cheaper gas prices, and if you are so much concerned about climate change, you win.”

Now that we know why the price of gas has risen, will this continue into the future? And if so, how long do the experts believe it will?

Trading Economics (a website that publishes millions of economic data) forecasts the average gas price to fall to $2.99 per gallon by the end of the summer, and around $2.80 per gallon by year end. The price of gas is then projected to fall to $2.42 per gallon and $2.31 per gallon in 2022 and 2023, respectively.

Of course, we should note that these are just forecasts, and it is impossible to predict the future. But it is interesting to note two separate and independent sources, one a governmental agency and the other an economic data company, say that the price for gas will decrease in the years ahead.

All signs are pointing to a price decrease. First, as can be seen from the historical data, gas prices tend to fall once the summer ends. Additionally, OPEC has started removing its restrictions on the production of oil. So, we should start seeing the demand go down and the supply go up. As the laws of demand and supply tell us, that will lead to a decrease in the price of gas into the future.

There’s no reason to pay full price at the pump when prices are high (or even when they’re not).

With the GetUpside app, just scan your receipt at the pump and you’ll get up to $0.25/gallon back in CASH every time you fill up. It’s a free app, and thousands of stations are offering cash back.

Sign Up and use code RSGURU for a one-time bonus of $0.20/gallon on your first receipt, which stacks with current offers for savings up to $0.45/gallon.

We may receive a referral fee for recommending some of the products, apps or services listed on this website.

Joseph Rich has been a financial analyst his whole career. His freelance writing centers around economic and investing analysis. He holds a BS in Economics and MS in Finance.